Wank Parties Plus From Prague 30

Wank Party 2017 finds Boda Gold enjoying the company of Romi Zuska. The two of them are on the sofa, kissing. Petr pulls off the jeans from Boda and Alan and Romi moves down to suck on Boda’s dick. Petr keeps sucking Alan who moves onto Boda so that he can suck Romi’s dick. Boda wanks himself as Alan sucks Romi before releasing the dick and going back down on Boda’s. Those asses will soon be ready for fucking. We rejoin Alan Carly, Romi Zuska, Petr Plodner and Boda Gold as the rimming ends and Boda sits his hot ass down on Romi’s throbbing cock. Boda wanks himself as Petr keeps fucking him deep. Soon Alan shoots a second creamy load with Romi fucking him hard. Romi wanks himself and quckly unloads his cum onto his hot body. Alan leans over and kisses Romi and then they all get close and kiss each other to end a great Wank Party. In this Wank Party we have Laco Meido, Martin Hovar, Boda Gold and Martin Polnak. They keep groping, licking and kissing as Boda and Martin P enjoy each other. Laco fucks it into the hot, waiting, mouth. Martin H sucks Laco’s dick as Boda keeps up his work on Martin P. Laco leans over to wank and kiss Martin P. Martin P then takes hold of Laco’s cock and wanks it as Martin H goes back down on it. He slides a finger into Boda’s ass as well before sucking some more. In Wank Party Part 2 we rejoin Laco Meido, Martin Hovor, Boda Gold and Martin Polnak as Boda is laying down with Martin P Kissing him. Laco is doin the same with Martin H kissing him too. Then they swap partners, with Boda moving to the step ladders for Martin H to slide his hard cock deep into his ass. Martin H fucks that ass so hard as Martin P straddles Laco and sits down on his hard cock. Boda continues to wank himself and he soon delivers his cumshot too as Martin H laps at his balls. 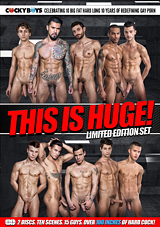