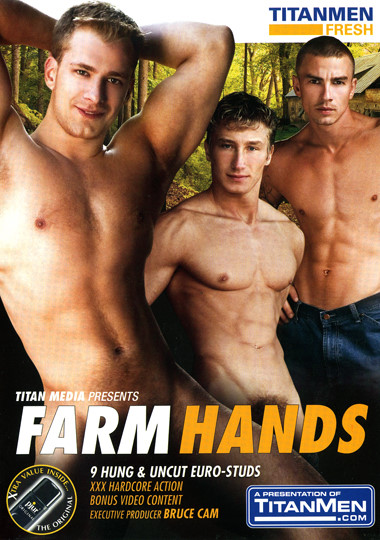 In his latest farm life fuck fantasy, Farm Hands, director Brian Mills brings you a cast of nine hot, clean-cut guys who fuck each other silly one fine spring day against a backdrop of the leafy forests and rolling fields of the Czech countryside. These studs come equipped with plenty of uncut cock that they love to swallow almost as much as they like pounding each other’s beefy, muscular asses. Smooth, hard-bodied Pavek Neumann and Vilem Cage get naked with built-like-a-bull Tadeusz Tesar. The guys are soon chewing on each other’s juicy nipples, deep throating dick, and instead of plowing the fields, plowing each other. Lean, sexy Joe Donovan and his horse-dicked pal Pavel Marek take a break in the barn where Pavel demonstrates his amazing self sucking skills. The two young studs are swapping some intense throat fucking when in saunters muscle mountain Olle Usmev with his thick pecs and an ass that was made to be fucked. Handsome David Novak and hunky Igor Martinek find handsome Thomas Lee jerking off all by his lonesome and decide to join in the fun. David and Thomas take turns cramming Igor’s meaty ass with cock, and they all slather each other with multiple loads. These butt-busting studs speak Czech, but they definitely grunt, growl and groan in the international language of lust-and they’ll get you moaning and groaning right along with them!