Abraham Kohn is hooded and he has his hands shackled high above his head. He is wearing just his underwear as he writhes against the shackles, as if to free himself. He is soon joined by his tormentor, Denis Pletak. Denis runs his hands over Abraham’s sexy body, feeling him all over. Then Denis starts to whip that slim body too. He releases the wrists and pushes Abraham down onto his knees, with the wrists shackled behind him. The underwear is down too,fully exposing the hot ass hole. Then a finger is shoved deep into that ass hole and starts to fuck hard and fast. Jirka Dratenik is busy at work, sitting at his desk. He is unaware that an intruder is coming into his office. The intruder is wearing a mask and soon overcomes Jirka, subduing him. The intruder soon has Jirka in an examination chair, shackled and gagged. both are naked and Jirka feels the hands on his body. His cock gets rock hard as it is wanked. His balls are slapped too. Then the mask is removed, revealing Adrian Serdar as the intruder. He leans forward and takes Jirk’as rock hard cock in his mouth. A finger is shoved into Jirka’s hole as his cock is wanked. Then two fingers are shoved deep inside and fucked hard into that ass hole as the cock is wanke. Adrian pounds that ass hole hard and fast, going balls deep. Simon Best is led into the room by Istvan Bernas. He is wearing a see-thru wrestling suit. Istvan kisses him and runs a hand all over that hot body. Simon’s cock is rock hard as he enjoys the attentions of Istvan. Then Simon kneels on a bench, positioned just right to suck on Istvan’s stiff dick as it is released from the underwear. Then Simon then turns around presenting his sexy ass. The suit is pulled down to bare the hot ass. Istvan spreads that hairy ass and rimes the hot hole. His tongue works on the hole and then a finger is shoved deep inside. Soon the finger is replaced by the big, stiff, cock. Istvan slides it deep inside and starts to fuck hard. 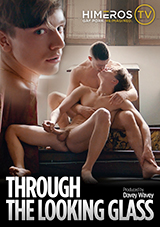